A content management agent is a procedure, predefined in an applications design, that can be run from within content manager. It can offer a variety of functionality related to content management, for example modifying the currently selected content document in special ways.

An agent is always run the following way:

Content Managers are defined in an OpenWGA design by adding a system resources folder "wga/content-manager/agents" below the "tml/html" folder. Inside this folder each individual WebTML module will be used as a single agent. 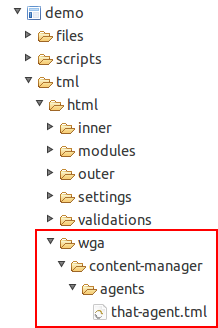 The contents of the agent module defines both: The agent dialog as well as the agent procedure (or at least the part of  the procedure that is directly triggered) in form of an WebTML action "run-agent": 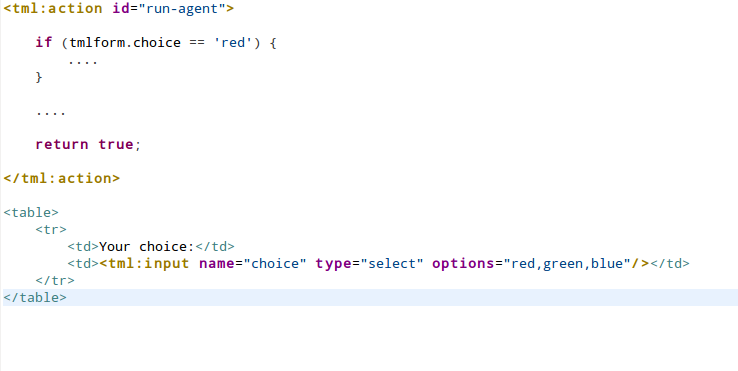 The contents of the WebTML module is loaded as contents of a WebTML AJAX portlet. Note that no <tml:form> is necessary for input fields defined in the agent module, as the surrounding CM already defines a form. Also it is not necessary to render the "Run Agent" and "Cancel" buttons as these are provided automatically by Content Manager as well.

The agent module is rendered in the context of the currently selected page in Content Manager. So the operations offered by agents may be specific to this selected document.

On clicking "Run Agent" the action "run-agent" is called and may run any TMLScript operation that is defined there. It is also ran in the context of the currently selected CM page. Additionally it retrieves the selections in the agent dialog as tmlform object. The agent procedure may react and work with both.

By default an agent in OpenWGA Content Manager menu is labeled by the name of the WebTML module that represents the agent.

Alternatively you can determine a specific WebTML label which is used instead for a display name. In label file "general.tmlscript" define a label "agent.<webtml-name>" which contains the display name to use. For example:

Here are some JavaScript tricks how you can manipulate the Agent / Content Manager UI.

Your agent may not be able to run on any context document that is chosen. So you might want to disable the "start agent" button in certain situations when the agent dialog is run under an unappropriate context .

To do this you can render this little script in your agent dialog code:

This will hide the "start agent" button.

While you can force the agent dialog to close by returning true in your agent action there may be certain situations where you want to trigger the closing of the agent manually. This little script can do this:

Reload the CM explorer and choose a document to display

In case your agent creates documents you will want the Content Manager UI to show the new document(s) once the agent has run. For this you need to manually trigger the reload process:

If you want a special document to be selected after the reload you can specify its struct key as first parameter. Most time you will calculate this from WebTML/TMLScript and also close the agent dialog after that. So a working example would be: